There's a running – joke? commentary? zen koan? – in the Linux community about the "Year of the Linux Desktop", meaning the year where people finally start using Linux instead of Windows. You can find an endless number of hot takes on the web about whether it has happened, is happening, will happen, will never happen, has happened but by way of the Android operating system... you get the idea.

Recently I've seen a similar theme on how now is finally the time for people to take control of their content on the web – the "Year of Publishing Your Own Content". There's strong takes like "Can we all please stop using Medium now?" and more nuanced takes on "Own Your Content". There's always Manton Reece's slightly opinionated thoughts on the subject or Eugen Rochko's Mastodon feed. We're even into the part of the cycle where people start to show demos of how they moved off of Medium to another platform and how to do it in gif form, analogous to the "how to delete Windows and install Linux" articles from the last turn of the millennium.

The points raised are all valid. The main hosting platforms are each their own brand of awful – Twitter (full of character-limited hate crimes), Tumblr (censorship), Medium (adwalled), and Facebook/Instagram (still run by Mark "I don't know why they trust me" Zuckerberg). What these treatises ignore is that publishing your own content isn't easy, and monetizing what you own is ten times harder than that. There might be more and more articles popping up now about how to move away from Medium, but go back two years and you'd many of the same people arguing for moving to Medium – it was the hot new platform and had all of the eyeballs. Everything that gets popular on the web will eventually get hit with the "nobody goes there anymore, it’s too crowded" line, but if you want to be seen, you need to be where it's crowded, and it you want to make money you need to be where it's incredibly, unbearably crowded. 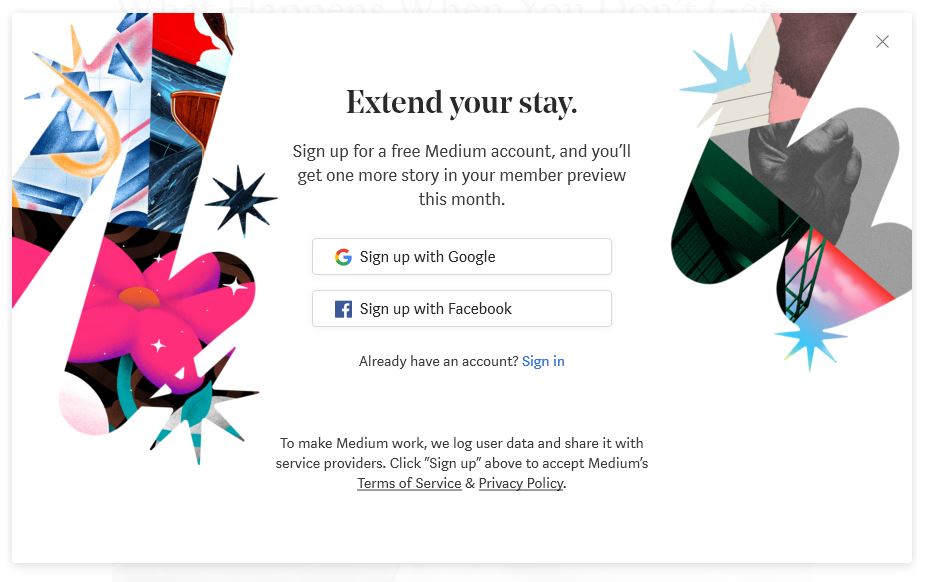 posting on Medium seemed like a great idea before all of the content got stuck behind this pop-up.

I have some bias in the "should you self publish" argument as you're reading this on a domain I own, but I also realize I have the technical and financial means to do so. Also, I'm not trying to sell you anything, and I don't particularly care if you even show up. This quote from Khoi Vinh on "Own Your Content" resonated with me:

...I’m not suggesting that what I do has any superior worth at all, but what I will say is that the difference between content that lives on a centralized blogging platform and what I do on a site that I own and operate myself—where I don’t answer to anyone else but me—is that what my writing on Subtraction.com has a high tolerance for ambiguity. It’s generally about design and technology, but sometimes it’s about some random subject matter, some non sequitur, some personal passion. It’s a place for writing and thinking, and ambiguity is okay there, even an essential part of it. That’s actually increasingly rare in our digital world now, and I personally value that a lot.

My advice? Post whatever you want wherever you want, but keep everything backed up as plain text. Be skeptical of any system that makes that difficult, and avoid entirely any one that encourages people to be awful. If all else fails, consider selling chapbooks at the closest highway rest area, that's real self publishing.